Playing table games has been a major recreational activity among people around the world, and India is no exception to this. Many casino players in India often visit a land-based gambling venue to enjoy the thrill and excitement of table games like Blackjack and Roulette. And with the sheer number of online casinos freely available on the internet, these players now have the chance to try their hands at table games from the comfort of their home or even on the move. 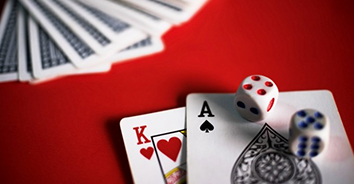 Blackjack has been a popular casino table game for centuries that are played by millions of casino players across the globe. Much of what makes the table game so appealing to players is the integration of luck and skill. There are various strategies that you can employ to improve your chances of winning the game.

The game of Blackjack is played using one or more standard decks of 52 cards, with each denomination assigned a point value. The cards between 2 and 10 are worth their face value. Picture cards (King, Queen, and Jack) are each worth 10. Depending on the Blackjack variant you choose to play, Ace cards may either be valued as 1 or 11. As a player, your objective in Blackjack is to win money by creating card totals that are higher than those of the dealer’s hand but do not exceed 21.

How to play Blackjack

Blackjack is usually played at an arc-shaped table that can sit up to seven players. At one corner of the table, there’s a section that details the minimum and maximum bets at the table, as well as the variations in common rules. The game begins when you place a wager by stacking chips in the betting square on the table. Once all the wagers have been placed, each player and the dealer receive two cards.

After the cards have been dealt, players decide how to play out their hands. As a player, you can choose from one of the following options:

Hit – If you hit, you take another card or cards in the hope of getting closer to 21.

Sit – If you stand, you opt to draw no more cards assuming that your current total will beat the dealer.

Double Down – The game of Blackjack also provides you with the option to double your original bet and receive only one or more cards regardless of their denomination.

Split – If it happens that your first two cards are of the same denomination, then you may choose to make a second wager equal to your first and split the pair, using each card as the first card in a separate hand.

Insurance – In Blackjack, you can make an insurance bet if the dealer’s upcard is an ace. This is a side bet that the dealer has a ten-value card as the down card, giving the dealer a Blackjack. 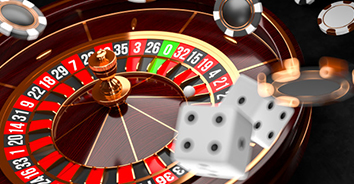 As one of the most social casino games, Roulette has been a casino favourite for as long as it has been launched. Surprisingly, the advent of Roulette came about more as an accident than anything. The original design of the Roulette wheel was one of the failed attempts at trying to create a perpetual motion machine by the famous scientist Blaise Pascal. The modern Roulette wheel found in online casinos today is not much different than the way it was originally designed.

How to play Roulette

As a player, your objective in Roulette is to predict the number on which the ball will land by placing one or more wagers that cover the particular number. As the players are placing bets, the dealer throws a ball into the spinning Roulette wheel. Players still have the option to place their wagers within the process. While the ball is rolling on the wheel, the dealer announces “No more bets”. At that point, you’re not allowed to place bets. The ball eventually lands on a number in the wheel. If it turns out that the ball lands in the same section, colour, or numbered pocket on which you’ve placed the wager, then you’ll receive a payout as per the betting odds. 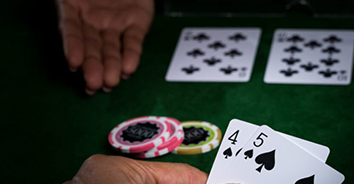 Baccarat is one of the table games that use more than one deck of cards during the session of bets. The most frequently used number of decks is eight, but some casinos might use six decks as well. Much like the game of Blackjack, each card has its specific value in Baccarat. Number cards between 2 and 9 are worth their face value, while Ace is counted with the value of 1. Jacks, Queens, Kings, and 10s are worth 0 points in the game of Baccarat. The purpose of the game is to get a total hand that is closer to 9 than any other player’s hand. Note that if a hand goes over the total of 9, it will restart back to zero.

How to play Baccarat

The game of Baccarat starts with the dealer dealing 2 cards to the player’s hand and 2 cards to the banker’s hand. Then the gaming procedure depends on the hand total of the two hands. If any of the hands happen to have a hand total of 8 or a 9, the round ends and the winning hand is paid off. Here, the hand with a total of 9 will beat the hand that has any other total.

The hand of the banker has another set of rules, which are as follows: 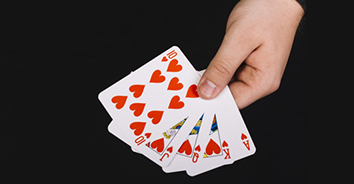 Poker is a popular casino table game that is a combination of betting and strategizing. It’s a casino game that has been featured in many movies and TV shows and is played privately at homes too. Today, there are numerous online casino sites that allow players to try their hands at multiple Poker variants from the comfort of their home.

The objective of Poker is to win money by having the best combination (hand) of five cards. The ranking of hands in Poker, from high to low, is as follows:

Straight Flush – Five cards in a row, all of the same suit.

Four of a Kind – Four cards of the same rank. Here, the fifth card (also called the ‘kicker’ card) doesn’t take part in determining the rank of the hand.

Full House – Three cards of the same value and two cards of a different but matching value.

Flush – Five cards, all in one suit, but not in numerical order.

Straight – Five cards in numerical order, but not of the same suit.

Three of a Kind – The hand with three cards of the same value and two unrelated cards.

Two pair – Two different pairings or sets of the same card in one hand.

One pair – One pairing of the same card.

High card – A hand with no matching cards.

How to play Poker

There are two to seven players in a traditional poker game. The game starts with the dealer dealing two cards each to all players beginning with the player on the left. The players have two choices – Bet or Check.

If any of the players at the table choose to place a wager, then the other players have the option to:

The betting round continues until everyone at the table has called or all wagers are placed in the pot. At the end of the first betting round, the dealer deals out three more cards face-up on the table. These three cards are known as community cards, and anyone at the table can choose to take them. The remaining players at the table still have the opportunity to bet, raise or fold.

If more than one player is still left after the final betting round, the cards are compared and the player with the highest-ranking hand wins the pot. 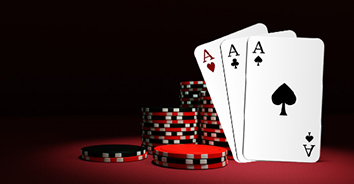 Teen Patti is an Indian card game that is inspired by the British card game 3-card Brag, and also draws similarity to Poker. The game of Teen Patti is so popular that it has been a feature in various local films in the country.

Teen Patti is usually played between 3 to 6 players and uses a 52-card pack without jokers. The aces are ranked as the highest cards in Teen Patti with 2 being the lowest. The ranking of hands in the game is as follows:

How to play Teen Patti

The game of Teen Patti starts with the players placing a bet. Generally, there is a fixed amount in place that players are willing to wager before the cards are distributed. After the players have placed the wager and the boot amount is collected from everyone, each player receives three cards face down. The boot amount is the minimum collected from everyone at the start of the game.

After the player and the dealer are dealt with three cards, the next step is to make a call or raise. To make a call means that you’ll continue in the game but won’t raise your wager, whereas a raise indicates that the player will be adding more money to the pot. As the game continues, the cash amount in the pot continues to grow and is won by the player who manages to stay in the game until the completion of the hand and has the best hand.

Here a look at the most common casino table game terms to help you get started:

All-in – This is when the player wagers all of their bankrolls in one round.

Bankroll – Bankroll refers to the amount of money that you’ve set aside for playing casino games.

Bet – The amount of money that a payer wagers per round.

Draw – Draw is when the betting round ends with both the dealer and the player having the same hand value.

Edge – Edge refers to the advantage that the casino has on the players over time.

Face cards – These are the cards that are depicted by faces and have the value of 10 in most table games. The face cards include Jacks, Kings, and Queens.

Punto – When playing Baccarat, Punto refers to the player.

Banco – When playing Baccarat, Banco refers to the banker.

Surrender – In Blackjack, surrender is when players choose to minimize their losses by leaving the game early at the expense of half their bet.

Some online table game tips for you

Here are some tips and tricks that can help you in improving your chances of winning in online table games:

Make sure you know the rules of the game

Making sure that you know the rules of the game is of vital importance when playing casino table games online. This will ensure that you won’t make mistakes while playing and will also make for ultimate fun and excitement.

The house edge is a term used to describe the advantage that the house has over the players. Try to play table games like Blackjack and Baccarat as they come with a low house edge and will allow you to push your bankroll for as long as possible.

If you’re new to a particular table game, you can employ a strategy while playing. A strategy will help you in knowing what decision to make at a certain point during the game. 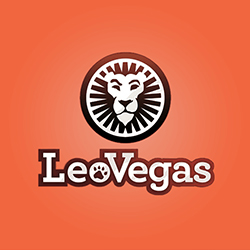 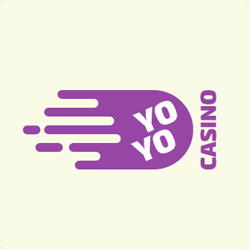 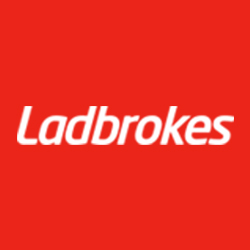